Yui Funami (船見結衣, Funami Yui?) is a character in the YuruYuri series who appears as one of the main characters in YuruYuri, MiniYuri, and a supporting character in Reset! and Ōmuro-ke.

She is a cool-headed girl who often acts as the voice of reason to the other characters. She is one of the four members of the Amusement Club.

Yui is a tall girl for her age. She has chin-length black/dark purple hair in front with two locks in the back of her head reaching her shoulders, and dark brown eyes.

She is seen mostly with her school uniform, but when not at school, she usually wears normal, light clothes. She usually sleeps wearing the panda pajamas given to her by Kyōko.

When she was younger, she used to have long hair in kindergarten but cut her hair in elementary school to look tough for Kyōko.

Yui is a mature, reliable and no-nonsense person. Although generally quiet, she will often times burst into laughter upon hearing Ayano's puns or Kyōko's jokes. She is also renowned for her retorts, especially directed to Kyōko.

Yui enjoys video games and is shown to be a good cook, especially at making omelet rice, leaving Chinastu obsessed with her food. She is a reliable friend and lives alone in an apartment complex, and although she won't admit it, she tends to feel lonely when others, particularly Kyōko, aren't around. Chinatsu compares her to a prince.

Although her academic ability is unknown, there are many scenes where Kyōko asks her to show her her homework, which suggests that it is pretty well. She is tall and a fast runner, because of she is so quick that she is solicited by the track and field club, denying them since she already is in the Amusement Club.

When she was younger, she was very boyish, not minding bugs and usually having a similar personality to the current Kyōko.

Kyōko Toshinō
Yui and Kyōko are best friends, although Yui frequently punishes Kyōko for her antics usually physically punishing her). Although more mature, Yui is actually 25 days younger than Kyōko. Despite this fact, Yui still seems to act more like an older sister or parent, providing Kyōko with food and allowing her to sleep at her house every so often. Yui has stated that Kyōko's parents and her own were friends, so they were born into friendship. Yui sometimes laughs at Kyōko's jokes, but never when Kyōko tries to mimic Ayano's puns.

Akari Akaza
Along with Kyōko, the three of them are childhood friends. She seems to be the one most respectful towards Akari among the Amusement Club members, but is also prone to making fun of Akari on some occasions.

Chinatsu Yoshikawa
She is initially oblivious to Chinatsu's crush on her, however as time goes by Chinatsu's affections became apparent, which makes Yui slightly uneasy.

Ayano Sugiura
They appear to have mutual respect for each other, though it seems they know each other mainly due to Kyōko. When Kyōko suggests they could be sisters, as Ayano wanted a little sister and Yui wanted an older sister, they appear to like the idea, but become quickly embarrassed after Kyōko asks them to "act their roles". Yui also commonly laughs after hearing one of Ayano's puns.

Mari Funami
Yui is like a big sister to Mari and Mari visits her often. Yui cares for her little cousin dearly, as seen when she wanted Chinastu to dress up as Mirakurun for her as Mari is a fan. Yui is also the one to give Mari her first errand and watches her from afar to make sure she is not approached by "suspicious people".

Chitose Ikeda
They don't interact much, although they are in the same class, but they're on friendly terms.

Sakurako Ōmuro
Not much is known about their relationship, but Yui says she's even lazier than Kyōko. They seem to be good friends nevertheless.

Himawari Furutani
Not much is known about their relationship, but they seem to get along. Yui, along with the other second year students, helps Himawari train back hip circles. [1]

Chizuru Ikeda
Yui empathizes with Chizuru, as another victim of Kyōko's teasing. Whenever this happens, she nags Kyōko to leave Chizuru alone. 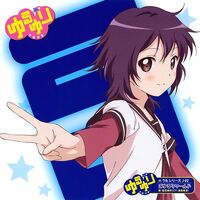 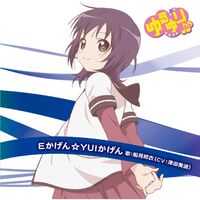 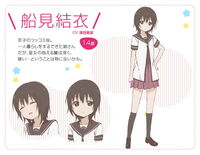 Yui in her panda pajamas 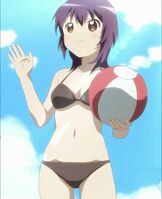 Yui cosplaying Raika
Add a photo to this gallery

Retrieved from "https://yuruyuri.fandom.com/wiki/Yui_Funami?oldid=9933"
Community content is available under CC-BY-SA unless otherwise noted.