YuruYuri Wiki
Register
Don't have an account?
Sign In
Advertisement
in: Pages with unsourced statements, Characters, Characters in YuruYuri, Relative

She is Chinatsu's older sister who is secretly infatuated with Akane. A former member of the Tea Ceremony Club, Tomoko was an inspiration to Chinatsu, causing her to join the Amusement Club.

Unlike most characters, Tomoko adores her little sister's works of art, apparently oblivious to how garish they are in reality and to other people. 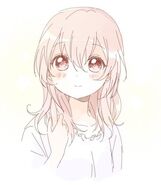