Takane is Chizuru's classmate, who is friends with Haruka, She is not very good at exercise or sports. She has a hard time talking to Chizuru because of her cool and aloof personality. However, after working up the courage to ask Chizuru to play volleyball, she and Haruka became friends with her.

Takane and Haruka idolize Chizuru for her cool demure and Takane even wanted to give her the nickname "Chi-chan," only to find out someone else already has that nickname. The two often give Chizuru usually odd gifts in attempt to see her "playful" side. 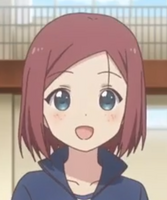 Takane in her gym uniform

Takane and Haruka fangirling over Chizuru