She is the current student council president who has very little presence (even less than Akari) and often speaks in an inaudible voice that only a few people such as Nishigaki-sensei can understand. She is often used as a test subject for Nishigaki-sensei's inventions. It has been noted that she has been present at a few occasions but has not been shown that she was there until a later episode. She is also the only known third year student, making her the oldest known student.

Rise is a short girl, being shorter than all First and Second year students. She had dark brown hair neatly styled in a hime cut, large red eyes, and a very pale complexion.

She is usually seen with her school uniform, but when not in school, she usually wears light-colored, cute clothes.

Not much is known about her personality, but she's shown to be a quiet and level-headed individual, in stark contrast to her student council companions. She's really close to Nishigaki-senpai because they do a lot of experiments together. 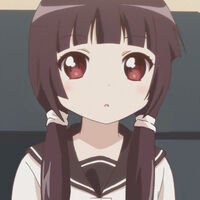 Official Art of Nana and Rise