Nana Nishigaki (西垣奈々, Nishigaki Nana?) is a character in the YuruYuri series who appears as a supporting character in YuruYuri, MiniYuri and Tensei Shitara Akari dake Slime datta ken, and one of the main characters of Touzainanboku!.

Nana is a science teacher at Nanamori Middle School who is constantly trying various experiments, often using Rise as a test subject which always result in explosions.

Nana is a young adult who has grayish white hair, with long bangs covering her right eye. She is seen wearing a lab coat.

Nana has a carefree and rather simple personality. Although she is usually late for school and punished by the principal for her explosive experiments and prohibits use of the science room, she is trusted by students.

She lives a mile from school and commutes by bicycle, but for some reason she wears a full-face helmet. She also experiments at home, such as failing to fly in the air with a cannon and blowing off the roof of the house due to the impact of the launch.

Nana first displayed her prankster powers when she made up a story about how she became interested in science, involving a toy robotic puppy which stopped working. It is later revealed that the real reason is when she accidentally plugged a miniature light bulb into a main wall socket, causing it to explode as a student.[1]

Nana and Rise have a close relationship. Nana herself described it as "an improper relationship". Rise helps Nana test out drugs the latter develops as well among other things. She is one of the few people who can understand Rise's quiet voice. She also cuts Rise's hair. When asked by Ayano what experiments do they conduct, Rise blushed embarrassed, leaving Ayano wondering just what they do together.

Nana when she was an elementary student

Official Art of Nana and Rise 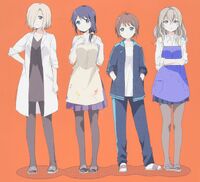 Official Art of Nana and the other school staff