Misaki has light blonde hair and hazel-colored eyes. Her face seems to look annoyed most of the time, especially when she feels her pride is at stake. She is seen in a white shirt with red tie above it, the standard uniform at the Elementary school they attend.

Misaki is Hanako's classmate, who sees her as a rival but she is completely unrivaled. She often tries to outshine Hanako which usually results in her embarrassing herself. Even when Hanako is trying to help Misaki, its rather hard for the latter to let her pride go and accept. This is seen when Hanako wanted to walk under an umbrella with Misaki so neither get wet. When asked by Sakurako if she was Hanako's friend, Misaki outright denied it, saying she was her rival.

Ironically, Misaki gets along quite well with Sakurako (who the latter mistaken for a dog at first), both viewing their friends (Hanako and Himawari respectfully) as their rivals and Sakurako sees her younger self in Misaki.

She is the unofficial member of Hanako's friend trio that consists of Mirai and Kokoro and herself. 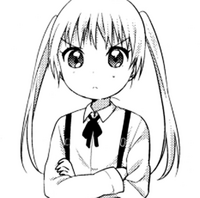 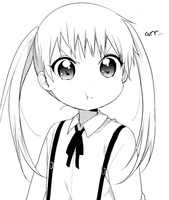 Misaki pouting at Hanako getting praised 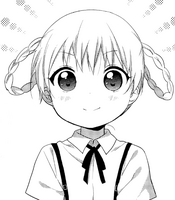 Misaki after Kokoro braided her hair 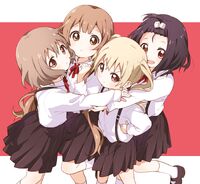 Official Art of Hanako and her friends 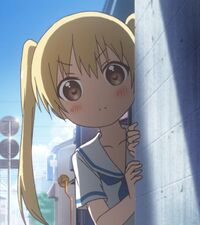 Retrieved from "https://yuruyuri.fandom.com/wiki/Misaki_Takasaki?oldid=10078"
Community content is available under CC-BY-SA unless otherwise noted.