Mirakurun (ミラクるん?), real name Kurumi (胡桃?) is the heroine of the fictional magical girl series, Majokko Mirakurun. When transformed, she greatly resembles Chinatsu. She is often drawn in doujin works by Kyōko Toshinō, who sometimes forces Chinatsu to cosplay as her.

Although Kyōko adores the anime, Chinatsu recognizes it for its weak tongue-in-cheek satirism of the magical girl genre.

Kurumi has orange short hair tied into twin tails. and wears her school uniform with a star in the middle of her bow. Her age and grade are unknown, but it is said that she is about a third grade of elementary school.

As for Mirakurun, she has pink hair (like Chinatsu) that she wears into two high twin tails. Her outfits is a simple Magical Girl costume, topped off with a witch hat and star wand.

Hero and heroine. A magical girl who is all about love and justice. Her objective in the series is to defeat the evil "Team Giga Giga" (composed of Rivarun, an evil magical girl, and Ganbo, a spherical robot with sunglasses) and restore the peace of the world. She is oblivious to the fact that Rivarun is her best friend when not transformed.

Although she has a pure and innocent personality with a natural appearance, she uses her finishing move, "Mirakurun Hammer" on Ganbo, causing his "skull" to cave in and him to collapse in a pool of blood.[1]

Mirakurun appears to have died whist fighting Rivarun on the moon and immediately prior to this, the two apparently make up. In season 2, it revealed that Mirakurun in fact survived. 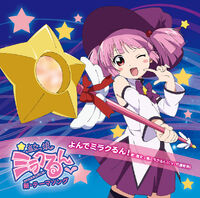 Kurumi and Raika in the manga 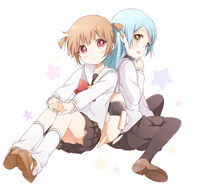 Kurumi and Raika with Ganbo sandwiched between them 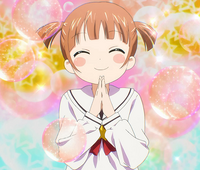 Kurumi in the anime

Kurumi in the mist transforming into Mirakurun 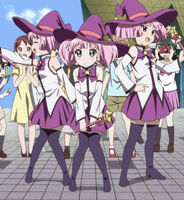 Chinatsu and other Mirakurun cosplayers

Kyōko mimicking Mirakurun's transformation
Add a photo to this gallery

Retrieved from "https://yuruyuri.fandom.com/wiki/Mirakurun?oldid=9303"
Community content is available under CC-BY-SA unless otherwise noted.