Kyōko is optimistic and flamboyant and a substantial part of the focus of YuruYuri.

Kyōko is a tall young girl with long blonde hair that has a dark-red ribbon on top and blue eyes.

She is usually seen with her school uniform, but when not at school, she usually wears flashy costumes, and frequently wears cosplay. She usually stands out, such as when she got animal kigurumi pajamas for her friends and a tomato one for herself.

Kyōko is a kind, upbeat, loud and albeit selfish, person who is often bothering Yui and crushing on Chinastu (initially because of her similarity with her favorite anime character in appearance). She has the tendency to disturb others around her by invading their space and acting freely without thinking. However, she doesn't have any malicious intent.

She is lazy and dislikes studying, but is a talented and applied artist. Despite her lazy attitude, she often gets high scores in tests after cram sessions and is also a talented dōjinshi artist. She loves the magical girl character known as Mirakurun, from an anime. In Season 1 Episode 05 "When Akari and the Cicadas Cry", Kyōko sells her Majokko Mirakurun doujin at Comiket with her friends.

She loves rum raisin ice cream and she is also a hardcore Otaku, and prioritizes her dōjinshi over studying. She sometimes writes stories about her friends.

When she was little, her personality was very different, as she was timid, quiet and easily upset[2] This changed dramatically at an unknown point.

Yui Funami
Kyōko frequently gets beaten by Yui, due to her antics (including sexual overtures towards Yui (or Chinatsu)), but they otherwise have a really good relationship. Kyōko frequently stays over at Yui's house, as she knows Yui is very lonely due to living alone (although Yui is too proud to admit it). Although less mature, Kyōko is actually 25 days older than Yui. Despite this fact, Yui still seems to act more of an older sister or parent, providing her with food and allowing her to sleep at her house every so often. Yui has stated that Kyōko's parents and her own were friends.
Kyōko sometimes in a 'half-joking' manner tells Yui she loves her - or, more often, gets Yui to say it, getting agitated if Yui isn't 'flustered' enough.

Akari Akaza
She and Akari are childhood Friends. Akari used to stand out more than Kyoko when they were young. Ever since Chinatsu joined the amusement club, Akari has a lack of presence, which she teases Akari about. She believes that Akari has Teru Teru Bozu on her head and her odango are detachable. She is known to unintentionally steal Akari"s role as the main protagonist.

Chinatsu Yoshikawa
Chinatsu is Kyōko's main infatuation since she is a spiting image of her favorite character Majokko Mirakurun. Kyōko has since realized Chinatsu as a person in her own right, and it has dampened her enthusiasm not one bit (neither has the full impact of Chinatsu's terrifying art, the weight of which knocked Akari out). She is absolutely fiery in her approach, sexually teasing Chinastu, ambushing her with crushing hugs whenever possible, playing with her feelings by coming up with ways to pretend Yui only has feelings for Kyōko - and yet placing a Mirakurun-looking figure of Chinatsu in Yui's home - to 'keep her company during those long lonely nights'. Kyōko gleefully absorbs all of Chinatsu's tsundere violence (including presumably the curses Chinatsu considered using when Akari suggested Kyōko is the one Yui "likes"). Chinatsu's responses range from gleefully wishing her death during the school play, and encouraging Yui to use the heaviest tool available to immediately smash Kyōko (...back into her old personality, after she'd become addled after a fall) - to holding hands with her on the Christmas date, and joining Kyōko when she went into the hot spring on her own (ostensibly to stop her 'feeling lonely').

Ayano Sugiura
She likes to tease Ayano, who considers her a rival in exams but still sees her as a friend and teases her playfully. Ayano is secretly in love with her, but due to her Tsundere attitude, she's too shy to admit it, and Kyōko doesn't realize it.

Kyōko is often the subject of Chitose's fantasies, in a Yuri pairing with Ayano.

Because of their similarity in personality, she gets along with Sakurako. Sakurako usually idolizing Kyōko's silly antics and inspiring to be like her. Kyōko goes with Sakurako to the arcade and assists her in wining cow kigurumi pajamas for her little sister. During their outing, Kyōko buys Yui an alarm clock and they record their voices in a mindless message.[3] Together they are a lively bunch.

Kyōko and Yui go to the library to study. There, they meet Chitose's twin, Chizuru, whom they wrongly recognize as Chitose. Chizuru chooses to ignore them. Subsequently, Kyōko attempts to get her attention until she was despised very much by Chizuru.[4] 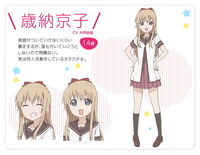 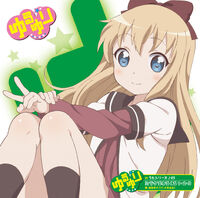 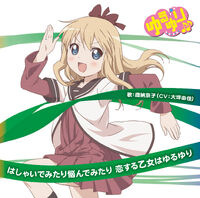 The main girls in the opening 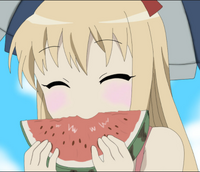 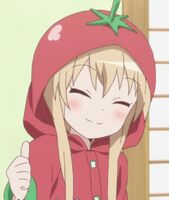 In her Tomato PJs 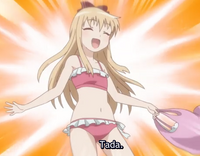 Kyōko in her bikini 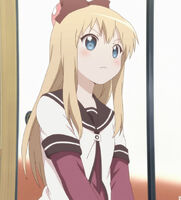 Retrieved from "https://yuruyuri.fandom.com/wiki/Ky%C5%8Dko_Toshin%C5%8D?oldid=10023"
Community content is available under CC-BY-SA unless otherwise noted.