Kaede is practically a splitting version of her big sister Himawari, only difference is Kaede has short eyebrows and slightly lighter hair color.

Kaede and Himawari have a loving sisterhood. Himawari often cooks for her and makes her favorite meals. Himawari also tries to be strong for her little sister like eating bell peppers in front of her even though she doesn't like them herself. She sends Kaede on her first errand and watches her from afar with Sakurako to make sure she doesn't get approach by "suspicious people".

Kaede is praised by Sakurako because she is kind and sweet "unlike" her sister. Although Sakurako likes her, Kaede is constantly making somewhat innocent yet annoying references to Sakurako's small breasts, such as comparing them to Himawari's. Kaede was taken "hostage" by Sakurako as a way to demand Himawari help her with her homework.

Kaede and Mari became friends when they met in the park. When Mari doing her first errand, she runs into Kaede who is in fact doing her own first errand. They both help each other along the way, being able to stay strong when they see a scary dog and when Mari tripped, Kaede patched her up.

Kaede and Hanako appear to be good friends and often hang out at the other's house. Hanako gives Kaede her hand me down clothes and lets Kaede win at card games like Old Maid. Kaede at one point said that when she's at the Oomuro Residence, its like she has four older sisters instead of one and Hanako says she wouldn't mind if Kaede was her little sister.

Kaede met Chizuru in the park and praised Chizuru's smile as wonderful, giving her the courage to make friends. 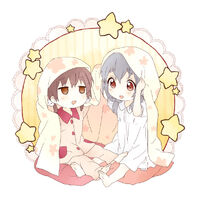 Official Art of Kaede and Mari 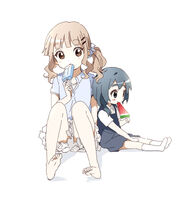 Official Art of Kaede and Sakurako

Kaede with Akane, Tomoko and Mari 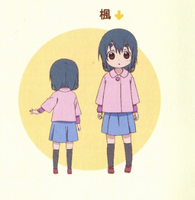 Anime Character Reference
Add a photo to this gallery

Retrieved from "https://yuruyuri.fandom.com/wiki/Kaede_Furutani?oldid=9675"
Community content is available under CC-BY-SA unless otherwise noted.