Hiro Takaoka (高岡ひろ, Takaoka Hiro?) is one of the protagonists of Reset! who also makes two cameo appearances in YuruYuri.

She is a classmate of Akari and Chinatsu and the best friend of Aoi Isurugi who is an admirer of Kyōko Toshinō's doujin works.

Hiro and Aoi Isurugi make a cameo in YuruYuri♪♪ selling their Doujins. It would seem that Aoi has finally succeeded in making some money.

Hiro was a shy first year student who kept to herself and had no friends but she was more or less okay with that. She started to like falling into the background and being unnoticed after a traumatic school event that left her feeling anxious around people. It is also the reason why she didn't cut her bangs, opting for people to be unable to properly look at her.

She finds a picture of Mirakurun drawn by Kyōko Toshinō. A girl named Aoi sees Hiro holding the picture and assumes that she is the artist and somewhat guilts Hiro into helping her. Knowing full well she can't create art this well, she goes to meet Kyōko to return the picture and ask for advice on how to create art.

Gradually after meeting Aoi, Hiro begins to have more confidence. Aoi is the one to part Hiro's overgrown bangs to the side with hair clips, as a start to their friendship.

Due to the discontinuation of Reset! and appearance of Hiro and Aoi selling their doujins, it can be assumed that they were able to work together as a team and that Hiro's drawings and confidence improved. 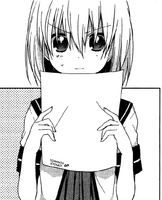 Hiro with her hair down 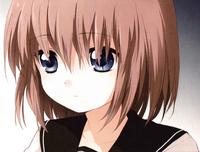 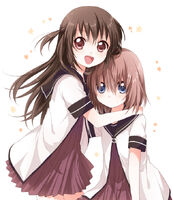 Hiro's cameo
Add a photo to this gallery

Retrieved from "https://yuruyuri.fandom.com/wiki/Hiro_Takaoka?oldid=9878"
Community content is available under CC-BY-SA unless otherwise noted.