Haruka has chocolate eyes with light brown hair that she wears tied up in a low bun.

Haruka is Chizuru's classmate, who is friends with Takane. Like her friend, she is not skilled at sports. The two wanted to befriend Chizuru but had a hard time talking to her due to Chizuru's cool and aloof personality. However, after playing volleyball with Chizuru, she and Takane became friends with her. 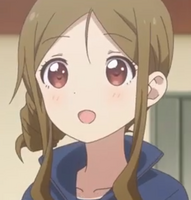 Haruka in her gym uniform

Takane, Haruka and Chizuru in YuruYuri San☆Hai! Episode 09 slide
Add a photo to this gallery

Retrieved from "https://yuruyuri.fandom.com/wiki/Haruka_Koyama?oldid=9319"
Community content is available under CC-BY-SA unless otherwise noted.