Chitose Ikeda (池田千歳, Ikeda Chitose?) is a character in the YuruYuri series who appears as a supporting character in YuruYuri, MiniYuri, Reset! and Tensei Shitara Akari dake Slime datta ken. As a member of the student council, she is almost always seen with Ayano Sugiura and the older twin of Chizuru Ikeda.

Chitose is a short girl with wavy, chin-length lavender-white hair, indigo tareme eyes and thin-framed glasses with round lenses.

Chitose has a gentle and calm personality. She speaks in soft Kansai dialect and likes tsukemono. She love pickles, and has a hobby of slicing them. However, Chitose has an intense yuri delusional hobby, where she has fantasies mainly about the pairing of Kyōko together with Ayano. She takes off her glasses and concentrates on her thoughts to enter into a true delusion. When she has a delusion, it often leads to near-fatal nosebleeds.

Whenever Chitose eats chocolate, she goes on a Yuri make-out rampage on everyone in sight, including her own twin sister Chizuru[1]. The only way to stop the "creature" is to tire her out with nosebleeds, achieved when Ayano kisses Kyōko on the cheek. In the manga, the reason for her rampage is due to the chocolate having alcohol in its composition, while in the anime it was from her getting drunk on alcoholic chocolate.

Chitose met Ayano when she entered Nanamori Middle School and saw Ayano sitting along and befriended her. They have been best friends since and hang out almost all the time that they have a deep connection. There are small hints in that Chitose may bare romantic feelings for Ayano but pushes them aside to support Ayano's crush on Kyōko. She has fantasies about Ayano and Kyōko in romantic situations and nosebleeds as a result. She is very sweet to Ayano.

Chizuru is Chitose's twin sister, with whom she shares a strong bond with. According to Chitose, this may be because she is "just shy" since at home Chizuru behaves like an ordinary sister, like scrubbing her back during baths, letting Chitose blow dry her hair and sleeping with her in the same bed.

Chitose is friendly towards Akari, just like she is with everyone else. Because Akari wants to know what "being an adult" is like, she promises to tell her some time. She gave Akari a bowl of lunch box of takuan, which pickled radish, due to her own love for pickles.

Chitose seems to get along just fine with Kyōko that Kyōko is usually in Chitose's fantasies with Ayano Sugiura. She often pushes Ayano to make a move on Kyōko, knowing that her friend has a crush on her.

They don't interact much, although they are in the same class, but they're on friendly terms. 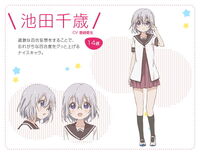 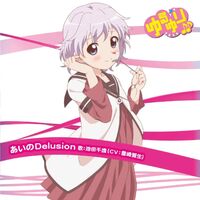 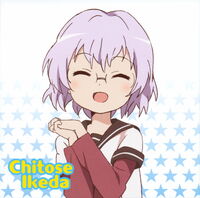 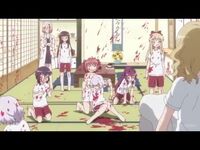 Ayano giving Chitose a helping hand in picking out clothing

Photo of Chitose and Chizuru as children seen in the anime 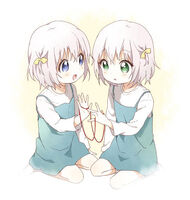