Jeong Mi Bae
Ayano Sugiura (杉浦綾乃, Sugiura Ayano?) is a character in the YuruYuri series who appears as a supporting character in YuruYuri, MiniYuri, Tensei Shitara Akari dake Slime datta ken, and a makes a cameo appearance in Reset!.

Ayano is the current Student Council Vice President who is known to be secretly in love with Kyōko Toshinō, whom she always refers to by her full name, usually in the form of an interjection.

Ayano has a tsundere type personality and this shows when she gets embarrassed around Kyōko. Although as of YuruYuri San☆Hai!, Ayano has started getting confident and more honest with her feelings.

Ayano is rather tall for her age, being only slightly shorter than Yui Funami with long maroon hair that is tied in a ponytail extending to the middle of the back with bangs covering most of her forehead and the sides of her face where two locks reach her shoulders and purple eyes.

She is usually seen with her school uniform, but when not at school, she tends to wear colorful and fashionable clothes.

Ayano takes her studies and her role as Vice President very seriously. As a hardworking student, she constantly sees herself as a rival to Kyōko Toshinō who always manages to beat her in tests without actually giving much of an effort, much to Ayano's dismay. She also has a tendency for making puns involving foreign words (usually based around famous locations), which tend to make Yui Funami laugh and she is known to be a tsundere.

Chitose Ikeda
Ayano's best friend. She first met Chitose in class when she was sitting alone until Chitose approached her. They have a deep relationship since they've known each other for so long. They are almost always seen together and have conversations with each other all the time. Ayano usually turns to Chitose for advice to approaching Kyōko. Chitose has frequent fantasies about her and Kyōko in romantic scenarios.

Kyōko Toshinō
Ayano is secretly in love with Kyōko. However, she is not honest with herself about her feelings until around the third season where she slowly starts to reveal her true feelings. Ayano takes on a very tsundere-like personality whenever Kyōko is concerned and usually argues and tries to compete with her just to try to talk to her. Kyouko seems unaware of Ayano's feelings toward her. This pairing serves as the main fantasy pairing for Chitose during her daydreams.

Yui Funami
They appear to have mutual respect for each other, though it seems they know each other mainly due to Kyōko. When Kyōko suggests they could be sisters, as Ayano wanted a little sister and Yui wanted an older sister, they appear to like the idea, but become quickly embarrassed after Kyōko asks them to "act their roles". Yui also commonly laughs after hearing one of Ayano's puns. 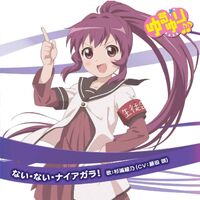 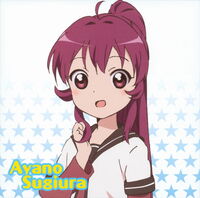 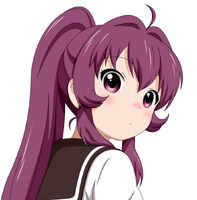 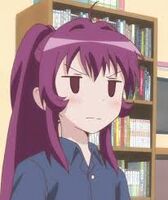 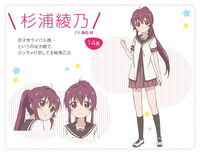