Pages related to the manga and spin-offs are currently under construction. Feel free to edit pages and provide sources and detailed information.

View source
watch 01:36
We're Getting Mutants in the MCU - The Loop
Do you like this video?
Play Sound
Anime Series

Akari Akaza (赤座あかり, Akaza Akari?) is a character in the YuruYuri series who appears as one of the main characters of YuruYuri, MiniYuri, Tensei Shitara Akari dake Slime datta ken and makes a cameo appearance in Reset! and Ōmuro-ke.

A harmony-loving, nice girl, she often stands out far less, in comparison to the other characters, so she is often bantered with her small presence. Her friends often make fun of her character as having the abilities to turn invisible and to fire her Odango like missiles as if they were detachable. Akane is her older sister, Kyōko and Yui are her childhood friends, while Chinatsu, Sakurako, and Himawari are her classmates.

Akari is a young girl of average height with chin-length red hair that has two small tight buns (odango) on the sides of her head and an ahoge forming on top, and round purple eyes.

She is usually seen in her school uniform, but when not at school, she usually dresses casually, with light-colored clothes.

When Akari was younger, she had longer hair, extending to the middle of her back.

Akari has a friendly and nice personality. She can easily make friends, but her small presence makes it easy for her to be forgotten or ignored. Her dream is being the center of attention. She's completely unable of being bad or doing bad things (as shown in the king's game in the season 3 episode 1). She gets easily scared and is prone to fainting when surprised or startled.

Akari's childhood friend and fellow club member member. Akari tends to be a punchline of Kyōko's jokes and antics. When they were younger, their personalities were switched. Akari was the outspoken one while Kyōko was the shy one.

Akari's childhood friend and fellow club member. They had similar personalities when they were young. They don't seem to talk to each other too much, but they are still good friends.

They have a good relationship and seem to be rather close, possibly due to being on the same school year. Akari, however, is afraid of Chinatsu's art, of Chinatsu's obsessive crush on Yui Funami, Chinatsu's "training" with her.

Akane is Akari's older sister who is secretly infatuated with her. This is discovered by Kyōko Toshinō in the first episode when she discovered photos of Akari, an Akari body pillow and various possessions belonging to Akari in Akane's room. Akari, however, shows a sisterly love for her, unaware of her true feelings.

Sakurako is in the same class as Akari. Whenever Sakurako has a problem (scraped knee, lack of chopsticks, button from her uniform falling off) Akari is there to help. Due to this, Sakurako have admiration and respect for Akari.

They aren't shown to be alone together at all, but it can be assumed that they're good friends because they're in the same class. Akari also showed that she is very impressive by the size of Himawari's chest.[3]

Akari respects Chitose, but she may be curious as to what "being an adult" feels like, as said by Chitose.

Akari as a child.

Her buns can be separated from her head

Akari sleeping as per usual. 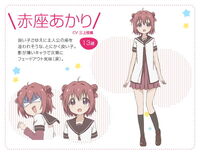 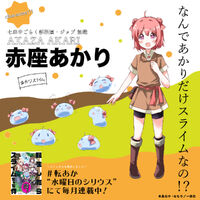