Akane Akaza (赤座あかね, Akaza Akane?) is a character in the YuruYuri series who appears as a supporting character in YuruYuri. She is a university student and the older sister of Akari Akaza.

Akane looks alot like Akari; both having same hair, only Akane's is longer (like Akari wore hers as a elementary student) and does not have her sister's trademark buns. Her eyes are always seen closed.

Akane attends a university along with Tomoko and has a part-time job at a fast food restaurant.

Although Akane appears calm and always smiling, she has a secret infatuation with Akari. Her room almost completely covered in photos of her sister and she often does various obsessive perverted things with her belongings when she is not around and reading lots of doujins about sisterly incest while wearing Akari's panties on her head.

She is friends with Tomoko and appears to be unaware of the latter's crush on her. 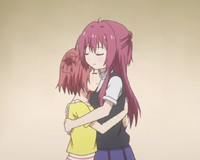 Official Art of Akane with Tomoko, Kaede and Mari
Add a photo to this gallery

Retrieved from "https://yuruyuri.fandom.com/wiki/Akane_Akaza?oldid=9990"
Community content is available under CC-BY-SA unless otherwise noted.